Inside the Start of Roland’s Bakery, a Houston Must

Born in Munsingen, Switzerland, in 1934, Roland Lanz was the middle child of a farmer for a large, state-run entity and a housewife who cared for five children. These simple beginnings did not restrict Roland as early on he dreamt of international travels and adventures. Determining the path was just the first step.

As Roland grew, he discovered an interest in baking and pastries. While typical students would pursue either baking or pastries, Roland studied both for three years in Bern, followed by one year of studying candy making. He held a few jobs afterward, yet his yearning for travel never waned. He even dreamed of becoming a pilot. As a next step, Roland applied for culinary jobs all over the world and would see where life would take him.

One evening he visited a local dance hall with some friends when a young lady caught his eye. After a dance or two with the pretty dressmaker, Roland asked Lotti Maurer out on a first date. Unknown to Roland, Lotti loved to watch John Wayne movies with good-looking cowboys and intriguing Indians. She hoped to move to Texas to find a cowboy to marry. Roland didn’t fit that mold but his interest in travel was enticing.

Lotti recalled standing outside in the snow against her mother’s judgement, waiting for Roland on their first date. He was an hour late. Forgiveness came quickly when Roland persuaded her with chocolates. Perhaps there was a future for young Lotti and this budding baker.

Roland and Lotti Move To Houston

Soon, the chance to move came knocking. Of all the applications that Roland had submitted around the world, a Swiss baker in Houston named Hans Huwyler was interested in hiring Roland, who was just 23 years old. This offer presented the two youngsters with the opportunity to marry and begin their journeys together. To their dismay, Lotti was not permitted to move to the United States as an expatriate without a job but this was not the end of the road. Coincidentally, Roland found a job for Lotti with a German “dressmaker for the stars” in Houston. After waiting six weeks while her new husband had already moved to Texas, Lotti took her first flight by herself to the United States, anxious about flying the entire way. The year was 1958 and Lotti was just 21 years old.

The young couple began settling into their new life with Lotti making dresses for Houston’s elite. “The ladies would arrive at the dress shop in limousines and I was so young, I had never seen anything like that in my life,” Lotti said. The two acclimated to Houston with a furnished apartment, a motorcycle and a welcoming group of Europeans who had also relocated to Houston. (Roland always loved airplanes and later fulfilled his dream of becoming a pilot in America in 1969.)

The couple was enjoying American life when the dressmaker who employed Lotti chose to start anew in California. While the dressmaker offered Lotti a position at the new company on the west coast, Roland and Lotti really liked Houston and decided to stay. Lotti found a new position in the alterations department at Sakowitz department store in downtown Houston. Roland continued working for Hans Huywler at the bakery but he yearned for more.

The Beginning of Roland’s Bakery 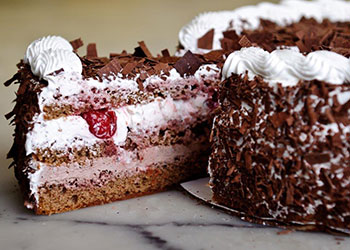 In 1962, Roland broke out on his own, bought the Borel Bakery for $6,000 and opened a Swiss bakery. From the beginning, Roland served European baked goods and pastries, sharing with Houstonians the delicious tastes of specialty foods. Roland said he had to teach people to like the finer quality of cakes and bread that he made. Roland’s Pastry & Bakery flourished by selling crispy, hand-molded pizza shells to various restaurants across town. Pizza Oven on Richmond Avenue bought 1,000 pizza crusts each week and Pino’s served the soon-to-become Roland’s Famous Black Forest Cake. These restaurants and many others provided a consistent customer base for Roland’s Swiss Pastry & Bakery.

Soon, it was evident that the Swiss pastry bakery needed to move locations so Roland rented a small space inside the Swiss Chalet. He later moved to Meyerland. Running out of space in Meyerland, he moved to River Oaks where he expanded into a restaurant and retail bakery, specializing in the European foods from his homeland of Switzerland. Roland’s Pastry & Bakery became “the spot” for Europeans now living in Houston. The stammtisch—a large, custom-made table in the restaurant—welcomed the regulars warmly.

“One reporter from the Houston Chronicle used to come to write his weekly stories there, too,” daughter Sylvia added. “It was quite the place to be.” 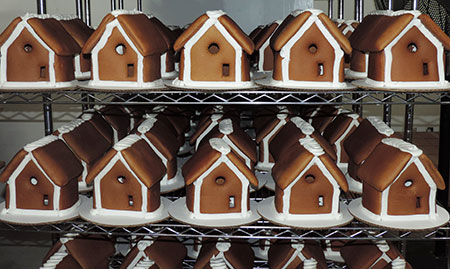 Philanthropist Ima Hogg regularly visited Roland’s Pastry & Bakery for a dozen almond croissants and actress Warner Roberts frequently pulled up in her Rolls Royce. In addition to the warm camaraderie and star-studded people watching, Roland’s Swiss Pastry & Bakery used hard-to-find ingredients that no other Houston venues offered. The cheese in the quiche was brought in from New York, Roland said. His bakery created Hansel and Gretel houses complete with a witch, coined after the famous fable. These later became known as Swiss gingerbread houses. Prior to the days of coffee shops on every corner, Roland’s Pastry & Bakery had imported an espresso machine from Italy, which delighted crowds. The Europeans loyally visited the bakery for their café au lait and the favorite cappuccino with fresh whipped cream. Word of mouth promotion continued to bring in new customers as the Americans learned what a great cup of coffee was really like.

When the Astrodome opened in 1965, Roland’s Swiss Pastry & Bakery earned the status of trusted vendor, supplying all the venue’s pastries for the first five years of its existence. “We supplied the Astrodome with 2,500 strawberry tarts and delicious sugar cookies each game day,” Roland said.

Special occasions at the Astrodome were right up Roland’s alley. In detail, he described baking and decorating the birthday cake for Muhammad Ali’s birthday in 1967. “The cake looked like a boxing ring, you know,” he said. “It took 1,500 eggs, 500 pounds of flour and sugar, and was four feet by four-and-a-half feet long.”

Too young to remember, his daughter Sylvia smiled when Roland told the story of Muhammed Ali eating his cake.

“Who made the cake?” Ali called out.

Roland stepped forward with little Sylvia in his arms. The famous boxer offered her the first slice of the cake. She was too shy to accept.

Still humble, this entrepreneur had not forgotten the tough times. There was the morning he arrived quite early and was alone at the bakery. He smelled a bit of gas from the oven but dismissed it. As he reached to ignite the pilot light on the gas oven, an explosion threw Roland across the kitchen. He suffered second degree burns on his face but returned to work the next day.

The Lanz couple also recalled when a fuse in the breaker box caught fire, causing extensive damage to the bakery. Roland was visiting Switzerland when his wife Lotti received the call at midnight. She joked that “some very nice firemen came to help,” but truly the tragedy was no laughing matter. Roland said it took three to four months to complete the repairs and the insurance agent had under-evaluated the bakery, saddling the owners with the heavy burden of repair costs. Still, the determination of this family kept the business going. 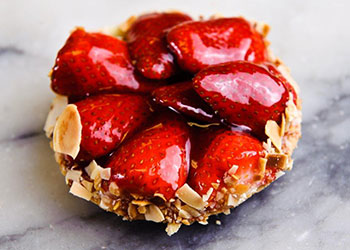 Roland said much of these challenges are inherent with owning a business. He chose to relish the fond memories rather than dwell on hard times of long ago. He laughed when reminiscing about his pastries selling for $0.75 each in the past and cookies went for $2 per dozen. Roland and his wife recounted the steps needed to make their treasured strawberry pastry with the tedious task of carefully slicing each strawberry by hand and placing those atop the pastry. There were no canned or pre-packaged ingredients used, after all.

“My hands would be stained red after all those strawberries,” Lotti chuckled.

Their biggest accomplishment, according to Roland, was the growth the bakery experienced over the years—from the $6,000 purchase price in 1962 to $1 million in annual sales. That’s a lot of baked goods.

This sense of pride was echoed in his daughter’s voice. Known as the baker’s daughter, Sylvia waited tables in the coffee shop and worked in the bakery on the weekends as other classmates played. Sylvia saw firsthand how her family toiled to make Roland’s Swiss Pastry & Bakery a success.

“There’s such a sense of pride, really,” Sylvia said. “Even today, people tell me I look familiar. I tell them my father was kind of famous as the owner of Roland’s Swiss Pastry & Bakery and they immediately tell me all their memories at dad’s bakery.”

After 30 years of ownership, the Lanz family sought a new owner for Roland’s Swiss Pastry & Bakery. After all, starting at 2 am and working until 4 or 5 pm can ware on even the most passionate individual. Roland wanted the new owner to embrace the bakery’s European roots and dedication to Houston’s community. In 1992, he met Gerhard Schaefer and his wife Elvira with German training as a master pastry chef and in hotel management, respectively. With a genuine appreciation for the European heritage of Roland’s Pastry & Bakery, Gerhard and Elvira purchased Roland’s Swiss Pastry & Bakery in 1992 and see a bright future for the company continuing.

“We still create the famous petit fours and no one does those anymore because you can’t freeze those,” Elvira said. “We even sent the popular Black Forest Cake to President George H. W. Bush in 1993 when the Bush family returned to Houston since we knew that was one of his favorites.”

Gerhard and Elvira proudly continue the tradition of fine, home-baked goods made from scratch with the best ingredients available. From rye bread and quiches to French pastries and lunch trays, Roland’s Swiss Pastry & Bakery, as it is called now, delights customers throughout Houston.

While no longer at the helm, Roland keeps an eye on the bakery and fondly asks Houstonians “to continue to support us.”

Thank you for supporting a small business Dismiss